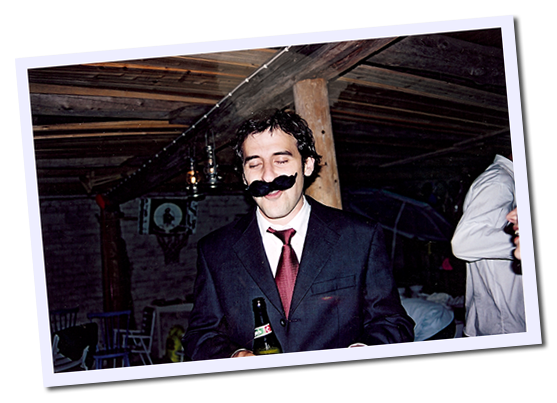 Since you are reading this blog, I thought that you might be interested in a bit of background about my person. If that’s not the case, please follow this link to the last page of the internet.

I have been involved with computers since as long as I can remember. I was nine years old when I set my eyes on the first one. It was a Spectrum Sinclair. I knew from that day on that computers would be at the core of whatever I would end up doing. Still, it took me a few years before I got my first computer. My parents, for some reason, thought that a chess computer would be better to start with. So I got that and went onto play chess like there is no tomorrow. Managed to win with our school team regional championship! Chess is a favourite game of mine and I went on to play with teams all the way up until my senior year. By then I was living in the States. There I joined the chess team, but we didn’t get very far. We managed to get into the state finals with the math team, though. But all I wanted while playing chess was a real computer. I finally got my wish, a 386SX, from ABB. Weird to think about the computer brands on those days. I soon was pulling all-nighters working on it, doing all kinds of crazy things with it, from creating bat files to automate anything and everything to editing the command.com just so the DOS would spit out strings in Spanish (ok, I also tried to do something useful with it… just can’t remember). I got a name at being good with computers among friends and relatives. At first I ‘fixed’ computers and helped with any IT related questions or issues, be them hardware or software. Later I started involving myself with sales. One summer there was a major pike in RAM pricing due to some fire in a major factory somewhere in East Asia. I thought that if I could get a large enough order placed from some other manufacturer, I could break into the Spanish market with good prices and a better margin. See, I thought the pricing was only affecting Spain and possibly Europe, but not the rest of the world. I must have sounded pretty convincing, because I managed to get my father to allow me to call all day long with the help of my brother to companies in Asia. It was there that I first found out about big business. I remember that call were a manufacturer told me they had a couple years production already sold to IBM. No chance I was going to get any cheap RAM in the quantities I was looking to buy.

As an avid reader of anything that interests me, I devoured the Spanish computer press every month. Since there wasn’t much of it, and I had plenty of time during school, I started getting foreign press. It was hard to come by, but I managed subscriptions to PCWorld and BYTE magazine in the 80’s. I got hold of as many books as I could and soon I found myself with little else to read, so, apart from reading the manuals of every appliance in the house, I started buying magazines in languages I didn’t even speak (yes, sometimes I also wonder).

Early on I read about online communities, and networks like the ARPANET, BBSs, and others. So after talking my father into it (took quite a few months) I finally got my V.22bis 2,400-bit/s modem. I was set. And my father upset… once the phonebills started coming in.

In the early 90’s David, a friend of mine from university, and I set up Diablo BBS. By then I managed to get a 9,600bps modem and shortly after a 14,400bps. I remember a friend at university (who shall remain nameless, though he knows who he is) arguing about the limit to data transmission over phone lines. He explained that another friend of his (in “Telecos” – Telecomunications Engineering – we were studying Industrial Engineering) had, in an experiment run at the faculty, proven the theoretical limit of data transmission over regular phone lines. And that limit was not much more than the current speed of modems at the time, 14,400bps(!). I’m so glad I didn’t choose to study Telecos.

Running the BBS and getting into the net at the university, both David and I saw our calling. And the internet was it. So we set up to create an ISP and by the time we were done, we were, to our knowledge, the third Spanish ISP. That was in 1995.

I got involved with networking protocols, IT support, HTML and tables (which later I happily substituted with CSS) and PHP (which I’m happy David became so good at), worked with Silicon Graphics, Sun workstations and enjoyed having the biggest monitors you could get in those days. I also managed to do a number of websites during the next 8 years. It was during that period that I was hired as a consultant by a venture capital firm and relocated to London. I worked in a number of projects under the venture capital firm, some born out of my own ideas. One of those ideas was to create a website to do what later Ofoto and to a better extend Flicker ended up doing… just that ours was being worked on 4 years earlier. That was fun and, for me, the best parts of working on projects like that one were the planning and strategy phases… were I excelled (I know, but this is my blog ;). They weren’t impeded up until the end by budget limitations :D. The latter has been a learning curve. Not taking accounts into account early on such projects made most of them unviable. These days I do take it seriously into account in anything I do… either that or I make sure someone does on my behalf (hence the moustache :-} ).

Coincidence brought me later to the world of CAD (and my wife being an architect made dinner conversations so much more interesting – well, not really, I mean, that we don’t talk about CAD that much… if at all… she talks about architecture, though.) After working the steps, I managed to land the job of CAD Manager (although this certainly didn’t improve dinner conversations at home). Which led to other interesting bits and in particular a trip to Las Vegas in 2006 where I dreamed of Broutek… and much, much more. Nowadays I am the CTO of Broutek, a company I co-founded. This blog will be a way to write about Broutek and other bits that interest me. Hope that was helpful in quenching your thirst of trivia about me. Feel free to leave a comment below so I can also read something about you, too :)